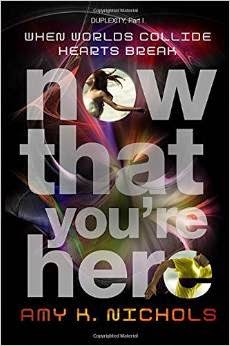 In a parallel universe, the classic bad boy falls for the class science geek.

One minute Danny was running from the cops, and the next, he jolted awake in an unfamiliar body–his own, but different. Somehow, he’s crossed into a parallel universe. Now his friends are his enemies, his parents are long dead, and studious Eevee is not the mysterious femme fatale he once kissed back home. Then again, this Eevee–a girl who’d rather land an internship at NASA than a date to the prom–may be his only hope of getting home.

Eevee tells herself she’s only helping him in the name of quantum physics, but there’s something undeniably fascinating about this boy from another dimension . . . a boy who makes her question who she is, and who she might be in another place and time.


I consider myself something of a connoisseur of stories about parallel universes. I’ve been a fan of multiple worlds since the Spock-with-a-beard episode of the original Star Trek, and I never tire of seeing the idea explored in television, films, and of course books. It seems like the last decade has enjoyed a kind of alternate-universe Renaissance; the idea of visiting other universes has gone from a niche concept like the old show Sliders in the 1990s to a mainstream popular culture phenomenon. That’s good news for aficionados like me who can’t get enough of these tales, but the flip side is that we’ve kind of seen everything by now. Or have we?

One of the joys of multiverse stories is that there are as many variations on the topic as there are (potentially) other worlds out there. The key to making these stories unique, entertaining, and moving is to focus on the characters who live them — and that’s where Amy K. Nichols’ debut YA novel, Now That You’re Here, shines. Main characters Eevee Solomon and Danny Ogden (who alternate chapters throughout the book), and a host of secondary characters including Eevee’s best friend Warren, are believable, sympathetic, and engaging. You need a compelling cast to ground a book like this in reality — take your pick of which — and whisk the reader along through the inevitable exposition. One of the trickiest parts of any book dealing with theoretical quantum physics is conveying it to readers, and Nichols manages that delicate balance well.

Rather than dwelling on the complex science that might make multiple worlds — and travel between them — possible, Nichols emphasizes the complexity of people: What makes us who we are, and the relationships that bind us together. What’s most important is how Danny’s jump from his universe to Eevee’s affects them both. Their stories intersect and parallel each other in surprising, fascinating ways; Danny loses his universe, a dystopian surveillance state, and in turn shakes up Eevee’s world, allowing her to realize just how controlled her own life has been. This book also celebrates geeks and how intelligence, curiosity, and compassion can empower teens to accomplish profound things — all with a bit of wit, humor, and romance.

From its literally explosive start, Now That You’re Here hooks the reader and pulls them into Eevee’s world right along with Danny. The mystery of how Danny exchanged places with his other self is explained (mostly) in a satisfying, and to me entirely fresh way, and the sensible and clever steps Eevee, Danny, and Warren take to unravel it and devise a solution to send him home is thrilling. But it’s the personal questions they ask of themselves and each other, and the answers they find together, that provides the real substance of the novel.

If you’re new to books about parallel universes, Now That You’re Here is the perfect place to launch your adventure across multiple worlds. And if you think you’ve seen it all, you’re wrong; though this book necessarily treads on some familiar ground, you haven’t met anyone like Eevee and Danny — or their other selves — yet. Fans of books like Parallel by Lauren Miller, Through to You by Emily Hainsworth, and Planesrunner by Ian McDonald shouldn’t miss this exciting take on the multiverse. I’m already looking forward to While You Were Gone, the second book in the Duplexity duology, in which we see what the alternate Eevee and Danny are up to in Danny’s parallel world. Brilliant, right?

Now That You’re Here by Amy K. Nichols is now available from Knopf Books for Young Readers. While You Were Gone (Duplexity #2) will follow in 2015.

This post originally appeared at The League of Extraordinary Writers.