I’m pretty excited about finally getting to see Star Trek Into Darkness tomorrow night. I’ve been dodging internet spoilers like it’s my job, and I’m one of the devout Star Trek fans who really digs J.J. Abrams’ take on the franchise. It doesn’t take a lot to please me: Give me time travel, alternate timelines, and Leonard Nimoy, and I’m a happy geek. (Props to Abrams and Fringe for also delivering on all three!)

I just re-watched the 2009 Abrams film, which (spoiler!) I did like a hell of a lot, and I’m happy to say I still enjoy it. In honor of the release of the new film, here’s my non-spoilery review of Star Trek from way back in 2009, which launched me on my Star Trek Re-Watches at Tor.com and The Viewscreen. In the comments, let me know what you think of the Abrams’ films, but no spoilers on Into Darkness until 10:00 p.m. EST tomorrow night, please. 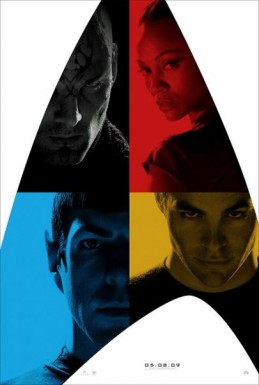 I have a long history with Star Trek. Not as long as some people can claim, and certainly not as long as the franchise’s own history, but I’ve spent roughly half of my relatively brief life on Earth as a con-going, trivia-quoting fan. I’ve seen the good and the bad, and while the series at its best can be mind-blowingly amazing, one can argue that after five television series and ten movies, there are more bad hours of Trek than good.

J.J. Abrams’ new movie definitively tips the balance back to the good side.

One of the problems with Trek, for its creators and viewers alike, is that by now we’ve pretty much seen it all. This is a serious handicap for a franchise founded on exploration and questioning the human condition; the newest incarnations of Trek still went boldly, but they were on a course heading into the proverbial toilet.

Admittedly, Abrams’ Star Trek doesn’t add a lot of new material to the franchise. In fact, there’s a heavy amount of old: established characters, a familiar setting, and frankly unoriginal ideas. We have Spock’s struggle between his human and Vulcan side, Kirk’s struggle with the “no-win scenario”, Kirk’s slashy struggle with Spock over logic vs. intuition, a standard revenge plot, a little space operatic romance, and hell—we even have time travel, the most Trek of concepts. The only young and fresh things in this movie are (most of) the faces, the sets and costumes, and the special effects. Not to mention the director and writers, who were tasked with harnessing the power of nostalgia to drive a shiny new enterprise.

And they did their jobs better than anyone could have imagined, showing far more care than George Lucas did to his own franchise’s prequels. I was highly skeptical of this new Star Trek. I have big love for its roots, the campy TOS (Star Trek The Original Series) and its direct successor, Star Trek: The Next Generation. Though Deep Space Nine and Voyager had their high points, the real essence of Star Trek has always been a crew, a ship, the final frontier, and a heavy dose of optimism. Those other shows were fresher but darker concepts, frequently good science fiction perhaps but not great Star Trek; there’s a reason why only TOS and TNG have transitioned to the big screen. After four years of the mediocre Enterprise and the last two films, Star Trek: Insurrection and Star Trek Nemesis, I just didn’t have faith anymore that we would ever again see anything good with the words Star Trek attached to it.

Happily, J.J. Abrams proved me wrong, because Trek has never looked this good. It starts with a literal bang, an extravaganza of explosions and space combat, but touched with a very human drama that impressed me before the title even blazed onto the screen. It was this balance of premium special effects—beyond anything we’ve seen before in the series—and the emphasis on characters that makes this film so enjoyable. As much as TOS was about interesting plots, good writing, and addressing the social problems of its day, it was also about the characters: Kirk, Spock, McCoy, Uhura, Sulu, Scott, and Chekov. TOS always highlighted the complex friendships among the crew and how they faced their duties more as a family than simply co-workers. The fact that these relationships translated to this movie so successfully with an entirely new cast demonstrates that it wasn’t really Shatner, Kelley, and Nimoy that we wanted to see (as much as we always want to see Nimoy, and he’s here too, anyway), but Kirk, Bones, and Spock. Fans are driven by the desire to see the continuing voyages of their favorite crew, and there’s a particular joy at filling in the gaps in their history that have never been put to film. How else can you explain the popularity of media tie-in novels, which are completely devoid of actors?

As much as Star Trek has been embraced into the popular culture of the world, practically part of our collective subconscious, this new film treats it like a shared mythology. It’s not just a continuation or expansion of the old stories, but a reinvention of them, in the way that Superman has been constantly revised and remade over his seventy-one year history; fortunately this Star Trek bears more in common with Bryan Singer’s sequel/reboot Superman Returns than the CW’s “young Superman” series, Smallville.

As different as things are in the new film, no one can question that the creators have a respect for their source material. The time travel gimmick that makes the Enterprise’s new adventures possible, relatively unburdened by over four decades of continuity that require a 745-page encyclopedia to wrap your brain around, is sheer technobabbly brilliance—as long as you don’t think about it too hard. The science is probably the weakest aspect of the new movie, but you’re hopefully having so much fun you don’t really care. And as much as they jettison continuity, they also canonize a fair portion of “unofficial” background. This is the first time we hear Uhura’s name outside of the tie-in novels and fan films, we learn that McCoy was divorced by his wife, and we see Spock bullied as a child for being half-human (as he was in the animated series episode “Yesteryear”). And there are some other improvements. At last, in Star Trek, no one can hear you scream in the vacuum of space—bringing the franchise in line with some of the more “realistic” space scenes of Firefly and Battlestar Galactica. I was most enthusiastic about the new transporter effects, which make you believe that the transportee’s molecules are really being torn apart. And we finally get to see the Enterprise upside-down and sideways.

Most importantly, these actors are quite good in filling the boots of those who have gone before, keeping the spirit of the original roles with their own edge, not an easy accomplishment. This is more of an ensemble than the recent TNG films have been. Chris Pine is brash and womanizing, but his version of Kirk lacks the command sense and charm that serve the Kirk we know so well on the bridge and in bed. Karl Urban channels Dr. McCoy the way we remember him, and his scenes with Kirk and Spock are pitch-perfect. Zachary Quinto is young Spock, understandably a bit moodier than we see him in most of TOS; one of the best moments in the film is when he tells the Vulcan Science Council to “Live long and prosper” when he clearly means the exact opposite. Simon Pegg brings his comic talents to a slightly goofier Montgomery Scott, but he’s a pleasure to watch in the role. John Cho adds the appropriate Sulu humor and muscle to his performance. Zoe Saldana is as smart and sexy as we expect Uhura to be, and she has a few surprising scenes in the film that show just how confident and strong she is. The poorest performances were Anton Yelchin as an overzealous Pavel Chekov, the new space nerd, catering to stereotypes; and Eric “You wouldn’t like me when I’m angry” Bana. He doesn’t have much to do though aside from grimace and jump around some, and it’s a shame because this film needed a stronger villain to challenge what will soon become the finest crew in Starfleet.

From the first scene of the film, we know this is going to be about death, how you face it and how you move on after a terrible loss. The conflict between Kirk and Spock isn’t only about their differences in logic versus emotion, but in how they accept death. Spock, who comes from a culture that reveres death and practices, in a sense, immortality, is a proponent of admitting defeat when there’s no hope for survival. Kirk, on the other hand, has lived in the shadow of death since the day he was born, when his father was killed in the line of duty, sacrificing his life so that others might live. Kirk is willing to fight long after logic dictates he should give up; he’s determined to cheat death. Spock faces it for the first time when he loses the people that mean the most to him and he doesn’t deal with the pressure well. There’s a lot of death in this film, but despite that, it still ends on a high note, filled with hope. Many of the previous films ended with the death of a character or the destruction of a ship named Enterprise; this one is probably closest to the end of Star Trek IV: The Voyage Home: there’s a brand new ship and its crew is exactly where they want to be, with the belief that some good can still come of all the pain they’ve suffered.

For all the weighty issues, the film fairly skims over the implications where another movie might have dwelled on them to the point of depression. At its core, this is an action movie, a summer blockbuster with its requisite amount of plot holes if you’re looking for them. This is also a very J.J. Abrams movie. Fans of his shows Alias, Lost, and Fringe might cringe at the CGI lettering of the on-screen text, perk up at the mention of Slusho, or groan at the Cloverfield-like monsters chasing Kirk on Delta Vega. (By the way, did anyone notice that the giant ball of “red matter” closely resembles Rambaldi’s Mueller device on Alias?) But Abrams knows how to direct amazing action sequences while focusing on his characters, and this film shows a sophistication in direction that makes it look like a film instead of a TV show on a big screen.

Like many Trekkies, the unraveling continuity of TOS and all that follow (while leaving the background established by Enterprise intact) doesn’t sit well with me. But as with any book-to-film adaptation, I can view this new series of films as its own thing, an offshoot akin to the Romulans spliting from Vulcan. I can continue watching DVDs of the old shows as much as I want, but they’ll always be reruns to me. I’ve seen those stories over and over again, so I’m excited that there’s now a new Trek out there that can reawaken the sense of wonder and fun that I’ve always sought in the franchise.